Do not let looks fool you at all. As small as the brand new Matricom G-Box Q [v3] looks, the more powerful features it presents to you for the best Android TV experience. The Matricom G-Box Q is the best value Android box for your living room that allows you to run your favorite streaming apps. 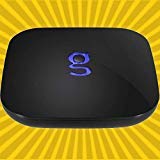 Check out the Best Cheap Android TV Box under $50 Budget

The increased 16GB storage compared to its predecessor frees you from any space limitations. With a fast processor, there is no slow buffering to waste your precious time.

Also, with the full support that the Matricom G-Box Q gives to Amazon Prime Video, you will never miss a movie or TV show again.

Here is the Matricom G-Box review with a quick glance at the merits and demerits that come associated with the 2016 G-Box Q2. The boxing of the Matricom G-Box Q2 is simple yet effective. It reveals a compact-sized device that packs in itself several classy features. It has a height of no more than 1.50 inches and dimensions of 4 inches in length and width.

But before zooming in on the design, let’s look at what the box holds. It comes with the usual Android TV accessories such as IR remote, HDMI cable and power cord. A rather short starter guide is also included in the box.

Focusing on the G-box, it is a polished device with a large G embossed atop it. The G emblem glows with a soft blue tint when the device is running. The corners of the Matricom G-Box are rounded, giving it a very modern look.

The high processing power enables buffer-free, smooth video playback up to 4k at 30 frames per second. All the credit for this lies with the high-performance Quad Core S812 CPU plus Mali-450 Octo Core 3D GPU graphics processors. Any video files with higher fidelity start to show artifacts as the G-Box’ hardware starts to struggle. However, most users won’t push their streaming box this much.

Matricom’s latest Android box comes with 16 GB of onboard storage. Two USB ports and an SD card reader allow you to expand disk space easily. This gives you plenty of room for apps, games, videos, and pictures.

Also, with 2 GB RAM, even the most demanding games and apps will run smoothly.

There is a Bluetooth connection, best for gamepads and remotes. You also get two USB 2 ports for connecting USB devices at the back of the G-Box Q. However, we would have liked to see USB 3 support to enjoy faster data transfer rates from our external hard drive. Sadly, Matricom only provides an HDMI 1.4 port. This isn’t necessarily a deal breaker. However, other boxes in this price range support the newer HDMI 2.0 standard.

Another great feature of the G-box is the dual band 5 GHz Wifi. There are no external antennae. Rather, there is a wireless antenna on the inside. The signal reception is great and provides plenty of bandwidth for HD streaming. The remote that comes with the G-Box Q2 is fairly basic but performs well enough. It feels good in the hand and the buttons have a nice feel to them. Navigating the user interface and menu is easy and intuitive. However, the responsiveness could definitely be better as there is a noticeable delay between button presses and actions being executed on the Q.

Also, the remote does miss a play/pause button. You can still halt and play using the menu, but we prefer to have a dedicated button for it.

The Matricom G-Box Q is like having an entire Android computer in your living room. With the latest Android Lollipop installed, the TV box provides an amazing experience. On top of it, the most recent developments in the Android OS will be automatically updated on your device without having to worry about anything.

There are no restrictions in the G-Box Q such as those imposed by Apple TV, Roku, and others. Install as many apps as you like with the sufficient memory backing your choices, and personalize your television experience in any way you want.

Enjoy apps such as Netflix, Hulu, Crackle, YouTube, and many more. Furthermore, enjoy a broad range of movies, television shows, and much more with Amazon Prime video that is supported by the device.

The Matricom G-Box Q comes loaded with Kodi, effortlessly upgrades to the new version as and when they release and offers lots of free streaming add-ons available for Kodi. All this means that the TV device is fully optimized for Kodi. Reason being that the G-Box Q was developed with Kodi Media Center in mind.

Consider ordering a BlazeKey along with the Q to automate the installation of free streaming add-ons for Kodi.

Another good news in the software department is that the G-Box Q comes with a custom firmware. Its build particularly revolves around the Amlogic s812 processor developed in the USA by skilled Android developers. This way, you do not have to fret about the firmware updates.

Matricom has worked hard to achieve a friendly user interface. It is relatively easy to use. The menu scrolls down, and by default, is divided into several categories: videos, music, games, latest apps, favorites, and settings. Items within each category run horizontally across the screen. There is flexibility to customize the default list by adding more apps to each category. However, you can only get rid of any of the pre-defined categories by deleting everything in it.

There is a horizontal bar that gives you a shortcut to access all the submenus and allows quick access to anything recently used.

The best distinguishing feature is the wide array of options in the Settings menu at the bottom. You can initiate a reboot recovery, update the system software, read tutorials, look up updates, and a lot more.

With the aid of the friendly user interface, it is trouble free to operate the device. That said, generally, the response is efficient with the built-in browser. Other browsers may take up a few seconds to load some pages.

Pre-installed Kodi runs quickly and is responsive. You only need to launch it from the main screen using the remote.

The Matricom G-Box Q provides HEVC decoding and Ultra HD playback of up to 30 frames per second. It performs in this area as per promises.

The G-Box Q is quite capable of playing standard and high definition material with an S812 processor that has good deinterlacing potential. Albeit, the implementation is a bit lacking which makes watching Live TV poor.

Unfortunately, the Q does not automatically adjust the video output frequency to match the content being played on the spot. Hence, without fixing the system setting every time you watch a video, you may not get the best playback results. You would need to do this because generally, movies require an output of 24 Hz. But that is not the same requirement such as those of other apps, rather 24Hz would make navigation feel slow.

On the brighter side, the G-Box Q is highly efficient in playing 3D content. It is capable of precisely identifying the side-by-side pictures, and displays top-to-bottom encodes correctly.

In the audio field, the Matricom G-Box Q sends out multichannel audio with many formats with the exception of Dolby Digital +. On the flip side, the audio is great with regular Dolby Digital and DTS 5.1.

The Octo Core GPU provides an excellent gaming experience. You only need to connect a mouse or Bluetooth controller for playing games. If playing Android games on the big screen is your thing, the G-Box Q definitely is a good choice.

A large number of people say that the G-Box Q is a delight to have. They absolutely love the new updates and are very satisfied with the new features it offers over its predecessor.

Two factors that have brought in such positive Matricom G-Box reviews are that firstly, Kodi runs brilliantly on this box. This is one thing that users have sought after for long, and their prayers have been answered with this box.

Furthermore, the device supports Amazon Prime and other apps like Popcorn Time. This, along with proper streaming and connectivity, has won the hearts of masses. However, many people are disheartened by the fact that it does not support Dolby Digital +.

Secondly, the navigation is really easy. Switching between apps and searching for new ones, while one is already running, is made simpler and better. Also, most customers are content with the image quality, the connection stability, and the general responsiveness of the device. However, there are some people who have complaints. The basic remote contributes to these negative reviews. The critical reviews say that the remote is very slow to issue commands. Now, whether that is because the processing is slow or that the remote is not sending signals quickly, is still a mystery.

Matricom G-Box reviewers suggest going for a wi-fi keyboard to solve this conundrum, saying that once that is solved there are merely any problems with the G-Box.

Some people have also been let down by the help team of the company, and their issues have remained unresolved. There are complaints that queries have not been answered. The tech support apparently is hard to reach or does not offer repair or refund.

On the flip side, some reviews, on the other hand, have praised the immediate attention they have received from the tech help team.

One controversial issue is the speed of G-Box. Where a vast majority is totally satisfied with it, a portion of reviews also suggest that the speed is slow and the device also hangs a lot. The streaming is working well for some whereas poor for others. However, a counter argument is that the video playback depends mostly on the speed of your wi-fi connection rather than on the G-Box’s software or hardware.

Overall, there are more positive reviews than the negative ones. The vast majority of the reviewers are in favor of the box, stating it is better than other similar Android TV boxes on the market. The Q’s specs are among the very best in this price range. Additionally, the simple-to-use custom user interface makes this device a great purchase for streaming newbies.

The remote issues can be solved by purchasing a wireless keyboard. The support team is trying its best to find solutions. The speed of the internet solves the streaming and hanging issues. The apps that the device provides are beyond amazing.

At a reasonable price, this device offers many outstanding features and has a few bugs that are not insolvable. This makes the Matricom G-Box Q one of the best Android TV boxes for Kodi.

Last update on 2021-04-19 at 02:43 / Affiliate links / Images from Amazon Product Advertising API. As an Amazon Associate I earn from qualifying purchases.