While you are busy shopping for others, remember to take time out to treat yourself this Black Friday! Below I created a list of the best BF2021 deals that will surely excite any streaming enthusiast.

Just a quick reminder though – many of these deals won’t be around for long, so act quickly.

Check out the best Black Friday deals on streaming services, TV boxes, and more below. I will keep adding deals to this page as I come across them, so check back for more incredible deals!

This is a no-brainer for anyone that streams movies, TV shows or live TV via IPTV. If you aren´t protecting your online identity, you put yourself at risk.

A VPN will encrypt your connection to the Internet and create an anonymous connection through a private IP address, which will hide your identity and activity.

A VPN may increase your streaming speeds because many Internet providers impose throttling methods for various apps such as Kodi, IPTV, etc.   A VPN will eliminate ISP throttling and allow you to connect at speeds that will stop buffering.

Another reason to use a VPN is to have the option of accessing sites or streams that are only available to people in certain geographical regions.

You can check out my post on why you should always use a VPN service when streaming online video.

IPTV Subscription Deals – Up To 35% Off

IPTV services already provide a lot of bang for your buck, especially when comparing them to traditional cable services. Access to thousands of channels and VoD content for just a few bucks a month is hard to argue with.

Of course, they don´t provide the same quality and reliability as Netflix, and a VPN subscription is almost a must given some of the recent IPTV takedowns. But still, all things considered, it is easy to see why IPTV services are so popular.

Here is a Black Friday IPTV deal that is worth checking out:

Not sure how to get started with IPTV streaming? Check out my guide. WiFi routers are such an integral part of our homes these days. A quality wireless router is at the heart of every cord-cutters setup, ensuring high-quality streams reach your devices as quickly and efficiently as possible. Below is a selection of high-speed Wifi routers to upgrade to.

Roku Streaming Players – Up to 42% Off

Roku creates some of the most user-friendly streaming devices on the market. What sets Roku devices apart from other devices such as Fire Stick or Apple TV is the fact that Roku does not push their own content and services the way Amazon or Apple do. For most people, the best option is the Roku Streaming Stick+, available for $29.

If you need a Roku with wired ethernet or USB media support, the Roku Ultra is a better option at $69. It’s also slightly faster than the Streaming Stick+ and it has two programmable buttons you can use to launch any app.

Roku Streambar for $100 (23% Off): The funky 4K streaming box doubles as a soundbar to improve your TV’s audio, and sounds pretty good for its size and price. 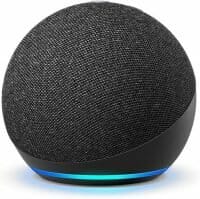 The latest version of Amazon’s smallest smart speaker is the fourth-generation Echo Dot. This is the first time that the 2021 version of the Dot — with its new circular-shaped body — has been on sale.

Hulu is a popular streaming service that can be a viable alternative to Netflix. With this Black Friday deal, you’ll get full access to Hulu’s streaming library, including both new and old shows. Catch up on fall TV you’ve missed or just binge watch some old favorites like Community or Seinfeld. Plex, the service that really does have something for everyone, is offering its coveted lifetime Plex Pass at just $89 this week until November 27, down from its usual price of $120.